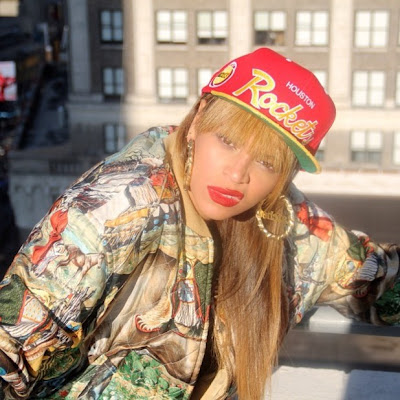 The singer's new track is rumored to be titled 'Ratchet' after the star posted an image on Instagram of herself wearing a pair of earrings containing the word. The picture has also sparked online rumors that the track could be a collaboration with Lady GaGa, who previously confirmed she had written a song with the same title and was looking for another female vocalist for it.
Further evidence for the collaboration comes from ...
an Instagram picture GaGa posted back in 2012, which sees her wearing a pair of hooped earrings with the work 'Ratchet' in the center.

What's more, Azealia Banks recently revealed that she has recorded a track called 'Ratchet' with GaGa, leading some to speculate that the track could feature all three artists.
Beyoncé and GaGa have previously collaborated on 'Video Phone' and 'Telephone'. The latter saw them on the run from the police in the accompanying music video, which finished with the words: "To be continued..."
GaGa has confirmed that the continuation of the 'Telephone' music video will feature on her upcoming third studio album ARTPOP.
Posted by afowzocelebstar