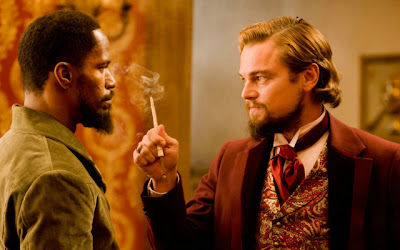 A new trailer for Quentin Tarantino’s Django Unchained will make you wish the release date wasn’t so far off. Set to come out Dec. 25, the action-packed flick is a take on the ...
1966 Italian spaghetti Western, Django. An all-star cast including Jamie Foxx, Christoph Waltz, Leonardo DiCaprio and Kerry Washington is no surprise for a Tarantino flick, nor is the abundance of gun fights, explosions and tight-lipped pithy sass. Written and directed by Tarantino on the heels of the successful Inglorious Bastards (2009), Django Unchained‘s plot revolves around a slave (Foxx) under the mentorship ship of Dr. King Schultz (Waltz). The two set out to free the slave’s wife, who is being held captive on a Mississippi plantation. And if you’re wondering how Django is pronounced: “The D is silent.”