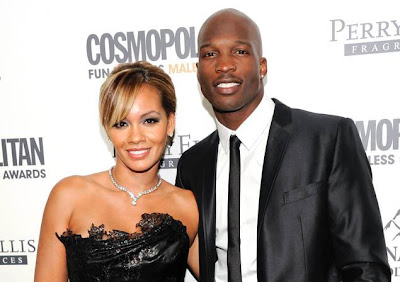 So a few days earlier, Chad Johnson (better known as Ochocinco before he changed his name back), was arrested for domestic violence after he allegedly head butted his new wife Evelyn Lozada.  According to NFL.com, the two got into an ... 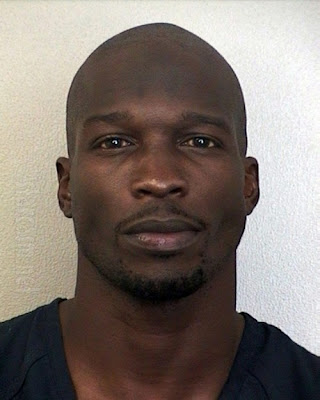 argument while driving home from dinner after Chad found a receipt for a box of condoms belonging to Evelyn [Update: There are conflicting stories on this..the Davie Police chief has been quoted as saying that it was Evelyn that confronted Chad over a receipt she found for a box of condoms].  The cops were called and when they arrived, Evelyn had a nice sized laceration on her forehead.  Chad told police that he and Evelyn accidentally knocked heads, however he was arrested and she was taken to a nearby hospital.
As of now, Chad is still in jail and is not eligible for releasuntil a bail hearing is set which could be as late as Monday.
The couple were married on July 4th and are set to appear in a Basketball Wives spinoff show ‘Ev & Ocho’, complete with a wedding special, which will premiere in September.
Meanwhile, VH1 producers are probably trying to figure out how to spin this. You couldn’t make this type of stuff up.
Hopefully this was all an accident. In the 12 years that he has been in the NFL, he has never been arrested.
As of saturday morning, Chad has been released on a $2500 bond and ordered to stay away from Evelyn until this is resolved.
Meanwhile, here is a little bit more clarity on exactly what happened via CBS News:
Allegedly, the argument between Johnson and his wife started in their vehicle when they were returning from dinner. Lozada apparently found a receipt for a box of condoms, and as they argued, Lozada told police that Johnson head-butted her, causing a laceration that needed to be treated. Johnson told police they accidently knocked heads.
“It gets pretty heated,” Davie police captain Dale Engle told the South Florida Sun Sentinel. “By the time they get home here in Davie, it’s pretty heated. She alleges he leaned over and head butted her. He says she leaned towards him and that they butted heads. Needless to say she has a good laceration on her forehead.”
Folks are saying this is all a publicity stunt to drum up some buzz for their new show but that sounds almost ridiculous. Although he is nearing retirement, would Chad really risk his NFL career and any type of future endorsements all for this type of publicity?
Posted by afowzocelebstar