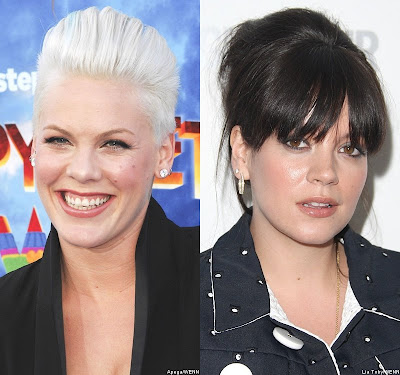 Just a few days after unveiling detail after detail of her sixth album, Pink has spilled that The Truth About Love will also feature a collaboration with Lily Allen.
In an interview with Carson Daly on AMP Radio, Pink spoke too about her ...
previous struggles in nabbing collaborations: “For the last 14 years, everyone has said no,” she said. “But this album, everyone said yes, and I think that’s because people think I’ve softened. I think people may think I bite.”
Pink’s collaboration with Allen, while a pleasant surprise, makes sense. Both of the pop songstresses are also new moms; Pink even called herself a MILF in Daly’s interview. Plus, both of them have been hard at work with producer Greg Kurstin on their respective new albums.
(im iltterally jumping on the tought of having and listening tol both albums)
Posted by afowzocelebstar