Kanye Makes His Debut on Keeping Up ... 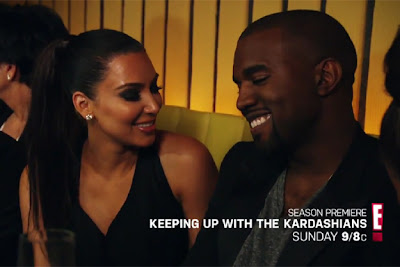 It was only a matter of time before the match made in publicity heaven found its way to reality television. Any doubts about whether or not Kanye West would lend his image to girlfriend Kim's hit show Keeping Up with the Kardashians were put to rest 2 nights ago as ...
the hip-hop phenom showed up to take his lady to Scott Disick's restaurant opening.
From the music building upon Kanye's arrival, E! must have known what kind of moment they had as he walked through the door. (You'd think it was the second coming or something.)
In the end, Kanye's debut was rather anticlimactic if only because it was refreshingly normal. His appearance was less about the over-the-top personae he's cultivated in the press and more about being the standard supportive boyfriend. He simply smiled all googly-eyed in the corner while Kim debated on what to wear, tossed a few sub-titled compliments her way, and doled out hugs to her sisters. Maybe this thing is going to go the distance after all.
Posted by afowzocelebstar