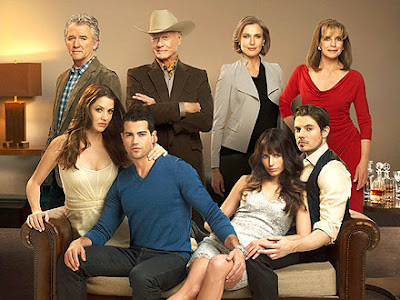 Dallas is back! And so are scheming brothers J.R. and Bobby Ewing. TNT's reboot of the classic primetime soap kicked off with its series premiere Wednesday night, and the backstabbing brothers did not disappoint.
But the new version of the show focuses on ...
their sons, John Ross Ewing (Josh Henderson) and Christopher Ewing (Jesse Metcalfe). These two good-looking cousins pick up right where their feuding fathers left off.
Like his dad, John Ross is ambitious and wants to stick with the family business: oil. But Christopher, who was adopted by Bobby and his first wife Pam, is seeking an alternate energy source in methane mining, which goes in line with the wishes of his late grandmother, Ellie Ewing, who declared in her will that there would be no drilling on the family's iconic ranch, Southfork.
To say they're at odds is an understatement but that's just the beginning of the goings on in Dallas. And in the show's soapy tradition, almost everyone on Southfork appears to have a secret.
Christopher learns troubling information about the potential danger of his methane endeavors. (One word: earthquakes.) John Ross likely derailed the marriage of Christopher and Elena (Jordana Brewster), who's in business with John Ross and the daughter of the Southfork cook. Elena reveals she received a breakup email from Christopher just before their planned wedding – but he says he never sent it. Even well intentioned Bobby has a secret: he is suffering from a stomach tumor, something his wife Ann (Brenda Strong) discovers when she finds his medication. Meanwhile, Bobby is closing a deal with gorgeous conservationist Marta del Sol (Leonor Varela), who vows to protect Southfork's natural beauty and resources.
not surprisingly, though, the biggest schemer of all turns out to be J.R., who's in business with ... Marta! "Bobby may be smart, but I'm smarter," he tells his son. But the mysterious Marta gets the last word: She meets up with John Ross at Dallas Cowboys Stadium, where she tells him he was right not to trust his slippery pop.
I'm so hooked now that im totally gonna keep on watching cause its not gonna dissapoint!
Posted by afowzocelebstar