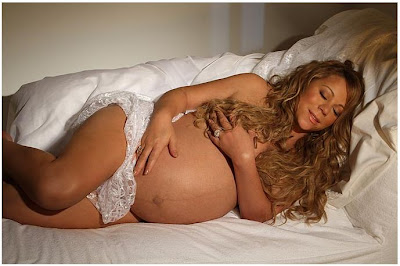 So so happy that Mariah finally put to bed exactly 3 years after she and Nick tied the knot. she gave bith to a boy and a girl and we got the names of the kiddies here!

Speaking exclusively to CNN, Carey’s longtime manager Cindi Berger revealed that the couple’s daughter is named Monroe Cannon - in tribute to movie star Marilyn Monroe, who has been a lifelong inspiration to the singer. No middle-names for the little diva, as quote-unquote ‘mother doesn’t have one’.

The couple’s son, according to the report, has been christened Moroccan Scott Cannon. With Scott serving as Nick’s middle name, as well as his grandmother’s maiden name. And Moroccan being drawn from the top-tier room in their home called the Moroccan Room. Beyond its Moroccan-inspired decor, it’s also the place where Nick proposed to his wife, overlooking Manhattan.
Nice names and lovely significances to the names .... its mariah so Suri watch the hell out
P.S. is it just me or are celebrities giving birth to boy/girl twins? (Jlo,Mariah,Angelina) hmn!!!!
Posted by afowzocelebstar