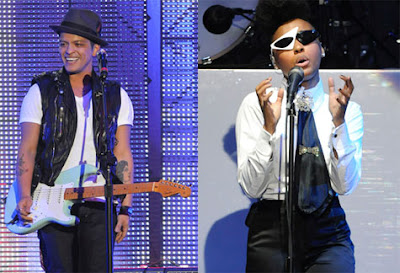 As i was not in attendance (darn)  and i rep both artists, i had to share with you this slice (according to another) of their first show together, engoy!!!!!
The pairing of Bruno Mars and Janelle Monáe proved to be a ...
winning combination. During the first stop of their co-headlining “Hooligans in Wondaland” tour at Roseland Ballroom in New York City on Wednesday night (May 4), the charismatic performers brought their high-caliber energy to the stage, affirming that quality shows are far from over.

Opening act Plan B warmed up the sold-out audience by performing hits off his sophomore album The Defamation of Strickland Banks. The U.K. rap sensation and his band turned up the decibels with his single “Prayin’” and a mash-up of covers including Seal’s “Kiss From a Rose” and a beatbox-assisted “Stand by Me.” After the bittersweet ode “She Said,” the band feigned a rouse in which rapper Ben Drew tackled his bassist to the ground.
If Plan B brought the heat, then it was Janelle Monáe who set the stage on fire in her classic black-and-white garb. She powered through a reviving “Faster” off her debut The ArchAndroid, before moving on to a beautiful cover of Charlie Chaplin’s “Smile.” With a sharp voice and a lot of charm, she kept hearts pounding, singing “Wondaland” and “Mushrooms & Roses.”
During her lively set, the eclectic songstress showed her artistry, painting a woman’s backside on a canvas and splashing it with the words “Freedom” and “Love,” while singing and crying out “I need your love!” “Cold War” and “Tightrope” came next as Janelle twisted and turned in her oxfords, mocking Plan B in the finale by jumping on her bandmates. She could not leave, however, without doing an encore of “Come Alive (War of the Roses)” to heavy jolting and random dancing.
The ladies were all aflutter when heartthrob Bruno Mars stepped out. Equipped with a pastel green guitar, the fedora-clad singer performed hits off his debut Doo-Wops & Hooligans, but started off with his very first written work, “Top of the World.” He then covered Barrett Strong’s “Money (That’s What I Want)” before delivering a ska-dipped “Billionaire.” He slowed things down with “Our First Time,” turning the lights down low and catering to his female fans. “Can I kiss you on your lips? Can I put my hands on your hips?” he asked.
After the slow dance, the platinum-selling artist channeled James Brown during “Runaway Baby,” before reminiscing with a song he grew up listening to: “Please Say You Want Me” by The Schoolboys. The audience sang loudly to “Marry You” as his segued into his current single “The Lazy Song.” Bruno then belted out the reggae-tinged “Liquor Store Blues,” an intimate “Nothin’ on You,” and the stirring “Grenade,” before capping the night with his chart-topping smash “Just the Way You Are” to a very satisfied crowd.
–Tanya Remekie
i really missed that?!?! why cant artists come over here and tour, not a combined concert crap! i mean plan to tour here as well as every other place! we will get there one day!
Posted by afowzocelebstar