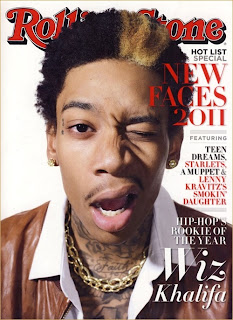 (i gotta put it out there! listening to his debut album was like listening to "Colledge dropout" = sweet, smoothe and easy listening as well as genre-breaking music)
Wiz Khalifa is still going strong on his Green Carpet college tour this month, but the rapper has already announced the itinerary for his Rolling Papers summer tour. The 30-city trek, which supports the rapper's just-released debut full-length "Rolling Papers," will kick off June 11 at the Bonnaroo Festival in Machester, Tenn.
Khalifa will be joined by ...
Big Sean, a Kanye West protege whose debut album, "Finally Famous," is slated to be released on June 21, and Chevy Woods, a member of Khalifa's Taylor Gang crew. Tickets for the tour go on sale to the general public on Apr. 20, but fans who sign up for Khalifa's official fan club can snag tickets tomorrow (Apr. 14).
Khalifa spent most of 2010 on the road on his 50-city Waken Baken tour. After his debut single, "Black and Yellow," climbed to the top of the Hot 100 in February, Khalifa's first album, "Rolling Papers," debuted at No. 2 on the Billboard 200 and moved 197,000 units, according to Nielsen SoundScan. The Pittsburgh rapper's next stop on the Green Carpet tour is tonight at Northern Illinois University in Dekalb, Ill.


Here are the dates for Wiz Khalifa's Rolling Papers tour:

i just know its gonna rock hard!!!!!
Posted by afowzocelebstar