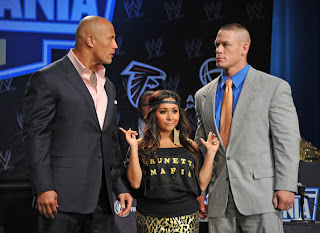 Snooki isn't quite 5 feet tall, but that doesn't mean she can't win a fight.
The Jersey Shore star was the main attraction in a six-way grudge match at ...
Wrestlemania XXVII in Atlanta on Sunday. Sure, she might've been booed when she first stepped into the ring, but a quick cross-corner backflip silenced critics—and opponent Michelle McCool—pretty quickly.
Could Snooki have found her niche if the whole reality television empire doesn't work out for her? We'd love to see her throw down with The Rock on a regular basis.
Posted by afowzocelebstar