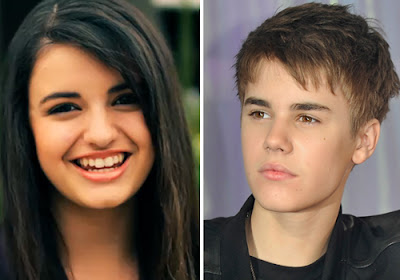 Step aside Bieb, Rebecca Black has taken her "worst song ever" and stolen your YouTube glory. Crushing the hearts of the Canadian super-star's frenetic fans, and making music critics the world-over cringe in ...
disbelief, the voice of the now infamous track "Friday," has supplanted Justin Bieber as the most viewed channel on YouTube this month.

If the numbers on Famecount.com are to be believed, Bieber is no longer the most sought out name on the ubiquitous online video-sharing website. Rebecca Black's YouTube channel has reached 112 million views as of this morning, which is about a half million more than Justin's.
In one of Black's more memorable lines of her song, she sings: "Tomorrow is Saturday. And Sunday comes after…wards." Though lampooned by many, "Friday" has become, like the Shake Weight and other so-bad-they're-awesome things in life, a cultural phenomenon. But the most viewed YouTube track in the world? Even the Bieb should be impressed by that.
Posted by afowzocelebstar