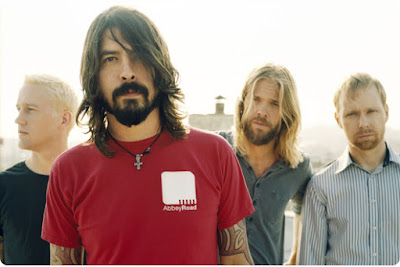 After nearly 16 years, six studio albums, a live set and a greatest hits package -- Foo Fighters are finally heading for its first No. 1 album next week.

Industry prognosticators suggest their new "Wasting Light" album could sell over ...
200,000 copies by week's end on Sunday, April 17 -- easily placing the RCA set ahead of new entries from Alison Krauss and Union Station, Paul Simon, Jessie J and Mana.
Foo Fighters have previously landed eight entries on the Billboard 200 -- with five of them reaching the top 10. They've gone as high as No. 2 with 2005's "In Your Honor" (which bowed with 311,000 according to Nielsen SoundScan) and have hit No. 3 twice with 2002's "One by One" and 2007's "Echoes, Silence, Patience & Grace."
The latter set is their last studio effort, and it bowed with 168,000 on its way to a cumulative total of 897,000.
Other albums on tap to make a top 10 bow next week include Krauss and Union Station's "Paper Airplane," Jessie J's debut set "Who You Are," Paul Simon's Phil Ramone-produced "So Beautiful Or So What" and Mana's "Drama Y Luz."
Posted by afowzocelebstar