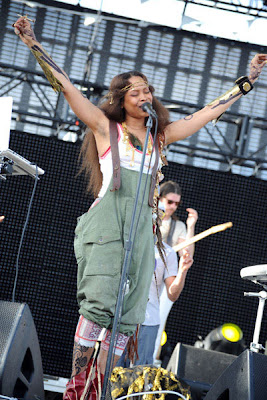 Erykah Badu spread peace, love, and happiness on Day 2 of Coachella. After a slight delay, the neo-soul songstress hit the main stage in a sheer shall, rolled up overalls, gold accessories, and a black hat. She opened with ...
“20 Feet Tall” from her latest album New Amerykah Part Two, performing crowd favorites like “Appletree” and her mainstay “On and On.”

But like Cee Lo Green before her, Erykah’s set ended abruptly when her microphone was cut due to her tardiness. She politely smiled, then tossed the mic head into the audience to express her disappointment.
Odd Future, including superfan Tyler, the Creator, and Wynter Gordon were spotted soaking up the sounds of Ms. Badu.
Posted by afowzocelebstar