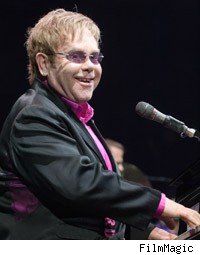 Elton John thinks Kings of Leon should have let "Glee" use their music.

"There's a big debate going on about the 'Glee' thing at the moment. A lot of bands say they don't want their stuff on 'Glee.' It's like, 'Lighten up, you assholes,'" John said on ....
"Late Night With Jimmy Fallon" Thursday. John is referring to KOL turning down "Glee's" request to sing "Use Somebody," which led to creator Ryan Murphy to blurt out in a Hollywood Reporter cover story, "F--- you, Kings of Leon." Bandmate Nathan Followill fired back on Twitter, telling Murphy to "buy a new bra," which Murphy called "homophobic." Frequent guest star Gwyneth Paltrow mediated the feud.
Added John on "Late Night": "This is a compliment, also it sends a positive message out. What the hell is wrong with you guys? 'Oh, we don't want our music played.' Well, Kings of Leon, lighten up guys, c'mon… listen, when someone wants to do your song, it's a compliment." 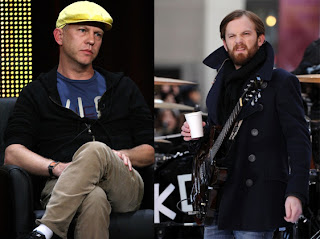 John says he still gets excited when anyone performs his music, such as "American Idol" this week.
"It's so great when people do your songs. I started off as a songwriter. Even now, when I get into an elevator and hear muzak... I feel really happy when it's one of my songs because it's a compliment when somebody records or does one of your songs. It doesn't matter if it's a bad version…. it's just a thrill." well said!
Posted by afowzocelebstar