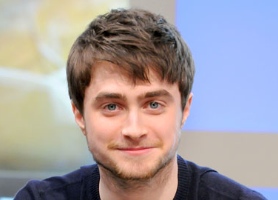 As an active celebrity supporter of LGBT rights, especially on behalf of the Trevor Project, it's hard for Daniel Radcliffe NOT to admire such an outspoken individual like Lady GaGa who doesn't keep her beliefs on equality a secret.

In a recent interview while discussing his ...
advocacy of gay rights, he openly admired Lady GaGa's "slightly more flamboyant" approach, saying:
"She's very outspoken as well, and it's just about being who you were born as. It's wonderful that other people are coming out from all different spectrums. I mean, she has a slightly more flamboyant way of putting her point across than I would, and it suits her a lot better than it would me. But we're both aiming for the same thing."
Absolutely! And we couldn't be happier that you both are too!
It's not really HOW somebody supports civil rights, so much as the simple fact that they do that will ultimately make a difference in the world.
While being interviewed last year about why he chose to work on behalf of the Trevor Project, the actor shared:
"It's something I've always been quite passionate about. Because I grew up around gay men, it was always a natural thing to me. It was never something I ever gave a second thought to."
good to know
Posted by afowzocelebstar