Beyoncé Praises Adele: ‘I Feel Like I’m Listening to God’ 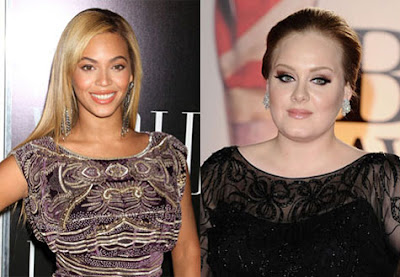 Adele may be able to knock listeners off their feet with her powerful pipes, but when it comes to one of her idols, she’s the one who gets weak in the knees. The British songbird recalls meeting ...
Beyoncé for the first time and the glowing compliment Bey bestowed upon her.

The “Rolling in the Deep” singer was overcome with nerves before the encounter. “I was about to meet Beyoncé,” she tells Rolling Stone, “and I had a full-blown anxiety attack. Then she popped in looking gorgeous, and said, ‘You’re amazing! When I listen to you I feel like I’m listening to God.’ Can you believe she said that?”
After calming herself down, Adele was inspired to create her own alter ego, a combination of Beyoncé’s Sasha Fierce and country legend June Carter. “I went out on the balcony crying hysterically, and I said, ‘What would Sasha Fierce do?’ That’s when Sasha Carter was born,” she says of the name she uses to pump herself up.
Adele is currently coasting on the success of her sophomore album 21, which has sold over a million copies in the U.S. since its release in February.
Posted by afowzocelebstar