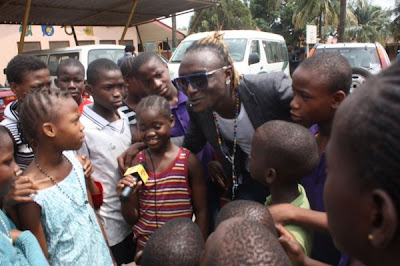 The musician along with his mother (who coincidentally ...
shares the same birthday) and friends including Big Brother Africa’s Uti Nwachukwu visited the SOS Children’s Village in Lagos to share his special day with the children.
As he was given a tour around the children’s village including the hostels and the classrooms, the children excitedly rallied around the music star. Some even sang songs from his previous albums and Terry G obliged them by singing along. Other than his presence, the musician also brought gifts and provisions for the children. When asked about the reason for this gesture, Terry G shared that “God has been good to me and my family in the last one year, this is just my own way of showing appreciation to him. Also, I love children and it gives me joy to do things that makes them happy, so it is not just the children who are thrilled to have me around, I am also thrilled to come to their midst and celebrate my birthday with them“ 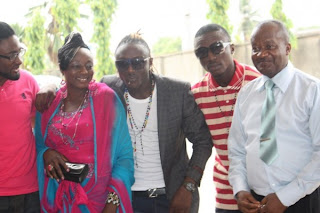 The first SOS Children’s Village in Nigeria was established in Isolo (Lagos) in 1976.
At present, the village provides home for 86 children in SOS family houses. The kindergarten and Hermann Gmeiner Primary School offers qualitative education to 88 children from the village and 226 children from the community.
In 2004, Computer and Music Block were built to give computer and music training to the children.
The community hall is the center of the village life with the morning schools assemblies, celebrations, festivals and naming ceremonies organized together with members of the community. wow such generosity is inspiring
Posted by afowzocelebstar