Russell Simmons On Chris Brown: 'Give This Man A Break' 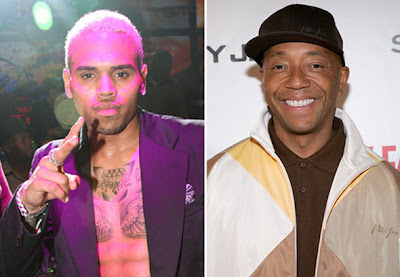 Yesterday, Russell Simmons took to his site, GlobalGrind.com, to voice his feelings and opinions about Chris Brown's recent outburst. The hip-hop mogul sat down for an exclusive chat with the R&B star, who is riding high on his the success of his new album, F.A.M.E., while also receiving backlash for his violent outburst on the set of "Good Morning America," where, this past Monday, following an interview in which Robin Roberts brought up his highly publicized abuse of Rihanna, Brown threw a tantrum backstage, tossing a chair into a window and storming into the streets of Times Square shirtless.
Russell Simmons summarized his opinions about Chris Brown's troubles by saying this:
"I know that this young man’s dancing, singing and art are his prayers. Without them, he’s left to deal with a cluttered world in a way that is far too complicated than he imagined when he was a 13-year-old kid with a dream of being famous...This is the freedom Chris knew as a child, but as he rose to fame, finding freedom became a lot more complicated. ...When fame snatches your freedom, the ability to control your own life becomes much more difficult.
Russell Simmons makes a salient point: Chris Brown has not seen normalcy in most of his life. He, like many young kids, dreamed of being famous. But unlike most, his dreams came true, as his voice, style and almost prodigal dancing abilities cemented his place as a young star in the spotlight. And with that success, Russell Simmons argued, comes the "loss of perspective inside happiness because the outside pulls you to work on the album’s marketing and promotion, the business deals, the corporate dinners, the groupies, the rest of the world." Needless to say, fame has gotten to Chris Brown. (His album name even spells "fame," which he uses an acronym for Forgiving All My Haters.)
One of the questions here is, at what point do we forgive? Considering the outpouring of support Chris Brown's fans have shown on Twitter and the fact that his album sits in the No. 1 spot on iTunes, for some, the process of forgiveness is definitely in full swing. The problem, it appears as though Chris Brown feels that enough time has passed that he shouldn't have to discuss that infamous night that led to a restraining order and his serving community service, a sentiment with which Russell agrees:
"Having lost control, some of these young artists, sometimes, do an unspeakable thing at a moment of time. And they pay the price. But...what’s not fair is artists paying the price of the sins in their young lives for the rest of their lives. Again, and again, and again. That’s just not fair. If we insisted on that there would be no art. There would be only shame; there would be no learning, no redemption, there would be no road for millions of fans to travel the journey of the artist to enlightenment.
So, do you agree with Russell Simmons? Is it unfair of us -- the fans -- to hold a grudge? At what point -- if any -- do we forgive those in the public eye for their actions? Weigh in in the comments, and tell us if you think Chris Brown is ready to be back in the spotlight.
Posted by afowzocelebstar