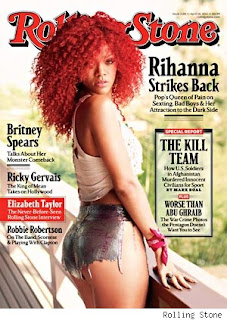 Rihanna opens up like never before in her cover story for Rolling Stone. The Bajan babe, who strips down for photographer Mark Seliger in the sexy images, reveals why she lifted the restraining order against Chris Brown, how she put up her guard following their domestic dispute, how she likes to get freaky in the bedroom, and her stagnant love life. Check out the interview highlights before the magazine hits newsstands Friday.


On why she agreed to let a judge ease the restraining order against Chris Brown: “We don’t have to talk again ever in my life. I just didn’t want to make it more difficult for him professionally. What he did to me was a personal thing—it had nothing to do with his career. Saying he has to be a hundred feet away from me, he can’t perform at awards shows—that definitely made it difficult for him. That was the only thing it was going to change, so I didn’t care. But you can never please people. One minute I’m being too hard, and the next minute I’m a fool because I’m not being hard enough.”
On putting up a facade following the former couple’s domestic dispute: “I put my guard up so hard. I didn’t want people to see me cry. 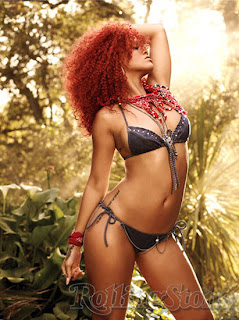 I didn’t want people to feel bad for me. It was a very vulnerable time in my life, and I refused to let that be the image. I wanted them to see me as, ‘I’m fine, I’m tough.’ I put that up until it felt real.”
On turning up the heat in the bedroom: “I like to be spanked. Being tied up is fun. I like to keep it spontaneous. Sometimes whips and chains can be overly planned—you gotta stop, get the whip from the drawer downstairs… I’d rather have him use his hands.”
On her love life: “I’m not sexing, I’m not even sexting. It’s on complete nil,” she says, adding, “I haven’t gotten a dick picture in a long time. I think people are a little afraid. It can turn out bad.”
On empathy for her father: “I actually feel really bad for my father. He was abused too—he got beat up by his stepdad when he was young. He has resentment toward women, because he felt like his mom never protected him, and unfortunately, my mother was the victim of that. I’m not giving him excuses. Right is right and wrong is wrong. I still blame him. But I understand the source.” great interview i must add
Posted by afowzocelebstar