Rihanna and Colin Farrell NOT Dating 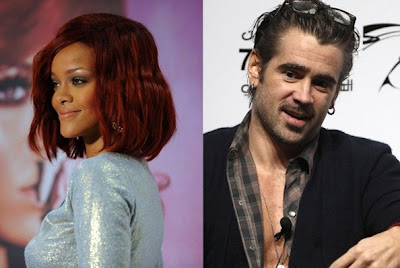 Is it just me or has Collin "not" dated every emerging pop star (case in point; Britney!) The rumors about Rihanna and Colin Farrell have been humming along for the last few weeks, and their run-in at an LA eatery last night only added fuel to the fire. But, sources say there's absolutely nothing going on between these two. "They are not dating," a source told People.com. "It was absolute coincidence they were at Giorgio Baldi at the same time. Colin was there at a business dinner and Rihanna was across the room."  Still, in February, reports surfaced that the two were sending sexy texts to each other after meeting on the UK's Graham Norton Show (and i saw it and as a 9ja boi, i gotta say that there was chemistry oh!). Reps have no comment about the buzz, but sources say its totally false. "There's no truth whatsoever to the reports and rumors that they're dating," the insider added. However, if these two ARE really dating, there's nothing too scandalous about their romantic involvement: Rihanna called it quits with her baseball beau Matt Kemp just before the beginning of the year, and Colin called it quits with Alicja Bachleda broke up in 2010. But i say lets wait it out, the cats gonna pop any minute!
Posted by afowzocelebstar