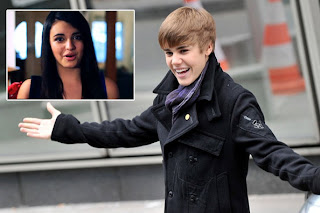 Rebecca Black is riding high after scoring a massive YouTube hit with "Friday," which went viral last week .The video currently has more than 30 million views and the single peaked over the weekend at the 25th most-downloaded song on iTunes.
While the video has generated a slew of disparaging comments, the 13-year-old singer told Good Morning America that she refused
to take the video down because she wouldn't give the "haters" the satisfaction. Rebecca also she said she'd love to duet with her idol, Justin Bieber.
“Justin, if you’re watching this right now, would you do a duet with me?” she asked. “That would be just unreal. It would make my life!”
Black's rocket-like ascent to Internet notoriety has raised a few eyebrows. Before you discount "Friday" as a flash in the pan, imagine what she might be able to do with better material. For his part, British mega-producer Simon Cowell said he'd be interested in meeting with her.
"I love her [and] the fact that she's gotten so much publicity," Cowell told British newspaper The Telegraph. "People are so upset about the song, but I think it's hysterical. I want to meet her. Anyone who can create this much controversy within a week, I want to meet. I love people like that."
Your move, Justin Bieber.
Posted by afowzocelebstar