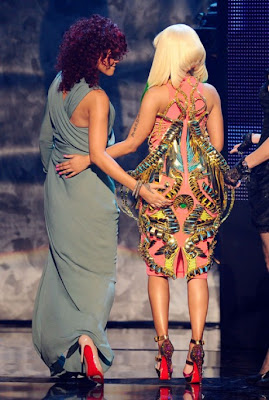 There’s been a flight delay. Nicki Minaj and Rihanna fans will have to wait a little longer to see the visuals for the ladies’ collaboration “Fly.” The video won’t make its debut until Memory Day weekend. Nicki explains why.


just in case you didnt know, Memorial day is May 30 in 2011. (Formerly known as Decoration Day) so thats that lol! Since both women dropped their albums in November, the Young Money rapper wants to wait and let Rihanna continue to shine before premiering the “Fly” video in late May.
“I’m gonna hold off on the Rihanna video and the Rihanna single for a little bit longer,” she told MTV News. “‘Cause we both kind of dropped at the same time. So she has a lot of [songs] in rotation and I want to let her stuff have a moment and do its thing, dominate radio. [Instead], I wanted to come out with something more fun.”
When the Sanaa Hamri-directed clip does arrive, she promises big things. “The Rihanna video is a freakin’ epic movie and you know it’s been done for like a month, two months now—very long time,” she added. “Look for it around Memorial Day weekend.”
In the meantime, the head Barb will release the video for “Super Bass,” a single off the deluxe edition of Pink Friday. “I’m taking it back to a few things that I’ve done, it’s a lot more fun,” shared Nicki. “It will be my most fun video and my most carefree video, lots of eye candy and lots of beefcakes.” lol! its gonna be worth all the wait!!!!!
Posted by afowzocelebstar