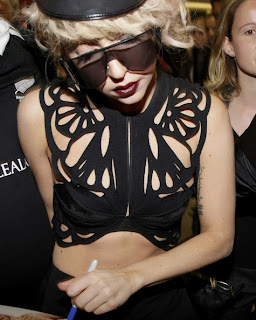 Happy quarter-century, Lady Gaga! The singer turns 25 today and celebrated her big day with 60 close friends over the weekend in LA.

Lady Gaga is 25!Gaga held her party at La Cita, a low-key Mexican hotspot, and turned the dinner into a mini concert! She took the stage with the restaurant's Mariachi band and belted out some of her hits, including "Born This Way" and some Madonna hits. Luckily, her "Born This Way" rendition was caught on video!

(So, add that to her Country Road remix of the new hit single, and that makes three awesome "Born This Way" versions!)
A source at the party said (via Us magazine) "she was onstage for most of the night performing for all her friends. No one knew she was going to go up there and perform with them, I think she just loves to be on stage and doing what she does so well."
Apparently there were several birthday cakes at her party, and while she wasn't at the mic in her sparkling black dress, she walked around and gabbed with her friends while nibbling on cake. "She was walking around saying hi to everyone," the source said. "It was an amazing night."
See the Mariachi version of "Born This Way" here