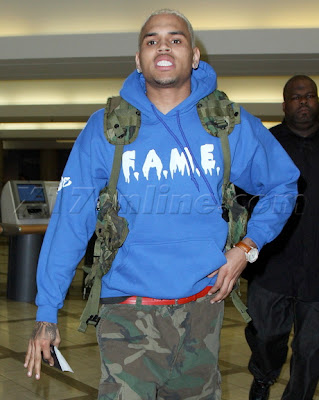 Chris Brown really doesn't want to talk about Rihanna anymore. If Brown seemed a bit tense during his interview early this morning with Robin Roberts on "Good Morning America" -- when she tried to talk about the aftermath of his infamous attack on the singer in 2009, he doggedly tried to steer the conversation back to his new album, F.A.M.E., which debuted today -- it was nothing compared to his behavior afterwards.
An enraged Brown reportedly stormed
into his dressing room, started screaming, and threw a chair into a window, sending shards onto the street below, according to TMZ.com.
By the time security showed up, Brown had ripped off his shirt -- ? -- and left the building, taking a moment to get into a staring contest with a segment producer who confronted him. He had already performed once in Times Square, but he blew off another scheduled performance for ABC.com.
Brown says he's tired about talking about his attack on Rihanna, shown here, left, at Clive Davis' pre-Grammy party in February 2009, and right, in a photo showing Rihanna after she was beaten that night.
In the interview, he told Roberts that he wanted to focus on his album, not events from two years ago. 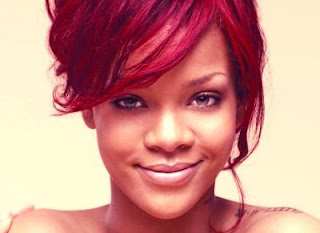 Afterwards, he tweeted, "I'm so over people bringing this past [bleep] up!!! Yet we praise Charlie sheen and other celebs for there bull[bleep]." He then deleted the tweet and adopted a more upbeat tone: "All my fans!!! This album is for you and only you!!! I'm so tired of everyone else!! Honestly!! I love team breezy!!"
(He's got a point about celebrating Sheen, but then again, Sheen -- if and when he ever returns to Earth -- will never again do a sit-down interview in which the word warlock is not mentioned.)
Brown is still on probation for assaulting Rihanna. He pleaded guilty and received five years probation, 1,400 hours community service, and was required to undergo a year-long class on domestic violence. Though he and Rihanna reunited briefly after the incident, they had broken up by the time Brown pleaded guilty. A restraining order against Brown has since been relaxed. Make una take am easy oh! this is certinly not the time for extra crap
Posted by afowzocelebstar