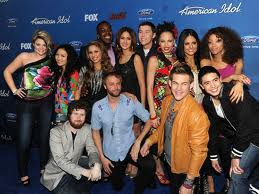 It’s Motown Night for the top 11 and the last chance for to secure a spot on the Idol Summer tour. The top ten divide is typically a pressure cooker night, and the Motown theme really cements that point. Even Rodney Jerkins acknowledges that his “chops” come from that seminal sound. To add to the nerves,
the opening montage is like a who’s who of superstars: Berry Gordy, Smokey Robinson, The Supremes, The Temptations, and The Jackson 5, to name a few. The only person not rattled by Motown’s legacy is Steven Tyler, who acknowledged that Motown inspired him to “make out with girls.”
To tackle these timeless songs is a tall order, no doubt. Adding to the pressure? A slew of famous faces in the crowd: Brad Whitford, guitarist for Aerosmith, bass player Bob Babbitt of the Funk Brothers, who took the stage with two of the Idols, Otis Williams of The Temptations, Marc Anthony, Liv Tyler, Gordon Ramsey and Kirsten Dunst. Shirley also reports seeing Leah Remini and Julianne Hough, who was seated next to Jimmy Iovine. Producers Jim Jonsin and Harvey Mason were also in the house.
Casey Abrams goes up first, looking like his usual cross between Seth Rogen and The Hangover’s Zach Galifianakis. His decision to tackle “I Heard It Through The Grapevine” sounded promising in the opening montage. He was on pitch and looked dapper, but growling the lyrics isn’t the same as the raspy and pained delivery of Marvin Gaye. Steven Tyler calls him the perfect entertainer with an out-of-control ego. Jennifer Lopez declares that he's “the guy,” and Randy called him a “true original.” Suffice it to say, Casey should be safe next week.
Thia Megia is so cute. Her performances every week remind me of the way I saw Jordin Sparks: this girl has Disney written all over her. And her selection of Martha and the Vandella’s “Heatwave” is a relief -- we get to see her do something up-tempo for a change. She’s hitting all the notes and looks absolutely adorable in a cute pink skirt. My 7 year-old daughter Amanda, for one, loves her heart-shaped necklace and earrings (are you listening, Disney? Your demographic is speaking). Still, Jennifer was cautious in her complements. “It’s great to see you cut loose," she tells Thea but also advises the 16-year-old to dig deeper each week. I sincerely hope America keeps her for another week. The kid has potential.
This week's theme was tailor-made for Jacob Lusk, who grew up singing in church, so soulful vocals come naturally. He picks Marvin Gaye and Tammi Terrel’s “You’re All I Need To Get By,” a song covered by so many singers, including the ‘80s group Animotion. Jacob actually restrains from the vocal runs until the end, and the result moved Steven and Jacob’s grandmother, assorted female audience members (and one guy) to bum-rush the stage for a hug-fest (poor Ryan looked he was about to lose his composure in his new role as Jacob Lusk’s bodyguard). What was wrong with that performance? Randy says, “Nothing.” I have one critique: he should watch the tape back and tone down the weird faces he makes when he sings. He should also be careful with the backup singers -- every week, they tend to drown out the performers.
Lauren Alaina, looking fantastic with a zebra print maxi dress and her hair straightened, chooses the classic Supremes hit “You Keep Me Hanging On." She does a nice job with the performances and even throws some attitude into it, which Randy describes as “swagger.” But it felt a little flat to me. It will be interesting to see how much more she grows as the competition continues. 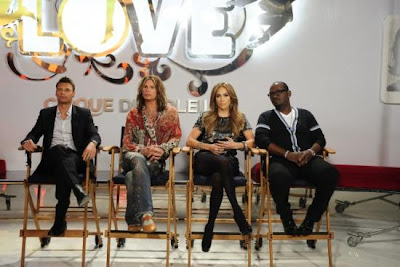 I was genuinely shocked Stefano Langone picked “Hello” by Lionel Ritchie and admitted he had never heard the song before. Really? Did he not see “The 40 Year-Old Virgin? But I digress... I pegged Stefano as more of a Stevie Wonder candidate, and David Cook already killed it when he did the song in his winning season. Stefano starts off a bit too soft, and looks like he’s trying a little too hard to keep his eyes open, as the judges instructed him to do. He struggled with the phrasing, but pulled it together in the middle and hit the big note towards the end. But this performance is not my favorite of his. He looked good in white, no doubt, but I agree with Jennifer: Stefano is struggling with connection, and her critique about the eyes was more about that. Show some emotion, Stefano! And pass me whatever was in that Tupperware, Stefano’s mom! If Gordon Ramsey is criticizing it, I want some!
Haley Reinhart really had to amp it up this week since America sent her to the bottom three last week. She chooses The Miracles' “You Really Got A Hold On Me” and slinked down that staircase as if challenging America to give her another look. True enough, she deserves one. She looked great (anyone else see the Miley Cyrus resemblance? Or the fact that her short shorts look exactly like what the other Haley -- Scarnato, that is -- wore during Season 6?). She brought back the bluesy growl that was missing with Whitney Houston’s “I’m Your Baby Tonight” last week. Steven was inspired to howl at the moon himself after the performance, and Randy said she came “roaring back.” Haley fans need to vote like crazy to keep her on the tour, because the competition this year is unbelievable.
Scotty McCreery stepped out of his comfort zone just a little bit with a countrified, down home version of Stevie Wonder’s “For Once in My Life.” Interesting that Scotty dressed completely in black tonight, a nod to Johnny Cash, perhaps? Cash, by the way, knew how to step out of the country zone as was evidenced by his cover of Nine Inch Nails' “Hurt.” Doubtful Scotty knows that, but at least he took a chance tonight. He’s at home in his lower register, but as Randy and Jennifer pointed out, his high notes are quite a stretch. Not exactly a slam-dunk, but Scotty gets an “A” for effort and one thing is for sure: Scotty isn’t going anywhere. Pia Toscano played it a little too close to the vest tonight with Stevie Wonder’s “All in Love is Fair." It’s a big song from the same album that had “Living ForThe City,” immortalized in Idol history by Taylor Hicks. She hits all the notes with her amazing range, looks fantastic, and is by far the biggest threat in the competition. I just wish she would do something other than a ballad (good critique, Randy!). If Pia is gunning for a Celine Dion-like career, as Jennifer points out, a little oomph never hurts.
Paul McDonald took a big gamble with "Tracks of My Tears," since the memory of Adam Lambert’s version is still so fresh with all of us. He takes the stage like he would a real concert, asking the crowd, “How’s it going, y’all?," then busts out his guitar, and sings a tad off key. Maybe it was the lighting, but Paul’s hair looked more out of place than his shiny white smile. That said, I like Paul with the guitar but I can't agree with Steven comparison of Paul’s voice to Willie Nelson. Really? I think he’s more like James Blunt.
Naima Adedapo is hanging on by a thread, and this reworked version of “Dancing in the Streets” by Martha and The Vandella’s did her only the slightest favor. Naima breaks into a slower tempo, then ramps up with an African drumline and concludes by busting a move for the judges. You have got to hand it to the girl, she really gave it her all tonight. E to the Z and Twiddley Dee, as Steven would say. Will it be enough to keep her on the tour?
Last but certainly not least: James Durbin. The ghost of Taylor Hicks is hanging over as he attempts Stevie Wonder’s “Living For The City.” James is fearless tonight, singing right into the camera and showing us a little more of his Lambert-like histrionics. It wasn't as restrained as last week, and that’s a good thing, because the crowd ate it up, even booing Randy, who was spot-on in bringing up the "rough" beginning of the song. In my opinion, it was not as strong as Taylor’s version from Season 5, but it was more than "crazy" enough to keep him in the competition, possibly taking him all the way to the top 3.
So who's in trouble tonight? Will Haley survive another week? Has Naima reached the end of her Idol road? Is Paul in danger of landing in the bottom? What do you guys think?
Posted by afowzocelebstar